Ladies, let me ask you a question. What bra do you wear during sports? Do you know what the most critical sports gear for women is? The sports bra!

Attention! 44% of women wear regular bras during workout instead of sports bras, which is wrong.

The bra is an abbreviation of the brassiere. Sports bras are made especially for sports, and most of them are short with U or V shape in front, and crossover straps or combined racerbacks at the back. You can not only wear a sports bra during sports, but you can wear them outside to show off your fashion taste. 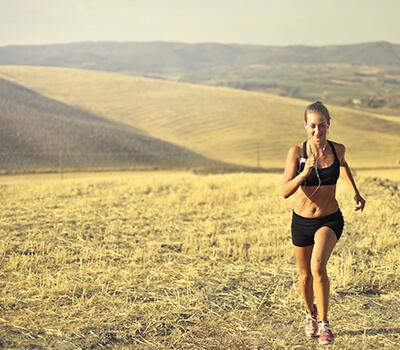 Why a sports bra?

Women’s breasts are covered by adipose tissue and ligament, and they would be stretched due to movement during sports. It is hard for breasts to return to their original state through sports movement, and the result is irreversible once the breasts were injured — a short time of sagging, a lifetime of regret.

Let me take running as an example. Most people like running since it is beneficial for health, but boobs dislike it. Every move during running injuries boobs. If you run a couple of hours each week, boobs would bounce tens of thousands of times. Such force would make boobs small, and what’s worse is that boobs would sag.

Running one mile equals to boobs shaking 0.08 miles or 442 feet. Boobs are doing a 3D movement during sports. According to research by the University of Portsmouth, boobs move in a track similar to the shape of number 8. Boobs would sway for about 0.08 miles during one-mile running. Breast tissue would be overly stretched due to the repeated radical movement, and elastic fibers would be permanently damaged leading to sagging breasts. Gradually pectoralis major would even be torn due to long term movement.

The maximum bounce range reaches 5.5 inches for big boobs during intense sports, and that for small breasts 34A/75A reaches 1.5 inches. That means your boobs run for two miles if you run a marathon of 26 miles. Your boobs would be severely damaged a lot without mentioning bruises, strangling caused by the bra straps.

The fabric used on a sports bra is usually moisture-wicking, while that on a regular bra is mostly cotton which is unable to wicks sweat in sports. The structure of a sports bra is professionally designed, which would avoid damage caused by friction between bra and skin.

Sports bras help improve your image and show up your figure, and you are still the fashion girl.

Are sports bras needless for A cup?

Boobs can’t stop swinging with the body during running, riding, playing balls, which causes lasting damage to elastic fibers in boobs: the larger cup, the broader movement range, the more damage. Not only large breasts would be injured during sports, but small ones do.

For 36C, the up-and-down movement range of boobs is 4.68 inches during sports.

It is evident that large breasts move drastically during running, and small breasts still need to endure powerful force during running, said by exercise physiologists. Most women wear the wrong regular bras and sports bras.

According to research by Triumph, 2/3 out of 10,000 women wear wrong size bras, and 1/3 out of them make do with the bra knowing that the size is not a good fit.

Regularly women would pick up sports bras according to the size of their regular bras. If you have a wrong regular bra size, it is very likely that your sports bra is in an incorrect size. American women spend an average of 20-30USD on one pair of sports bras, but some women would cut the expenses. Instead, they would use old regular bras as a replacement for sports bras.

For women, picking the right bra is a never-ending task. Boob shapes change over time due to a lot of reasons such as obesity, laboring, or hot weather. According to bra experts, a bra retires and serves its purposes once it is worn for 100 times. For 100 times, a bra goes through adventures of perfume, sweat, and washing. Most women keep a bra for too long.

Typically, you would need at least four pieces of bras for replacement, but that is for one year period. Ladies, no matter what sizes your breasts are, please do not forget the importance of sports bras. Don’t forget to get one before you do any sports.

How to Choose a Suitable Sports Bra? 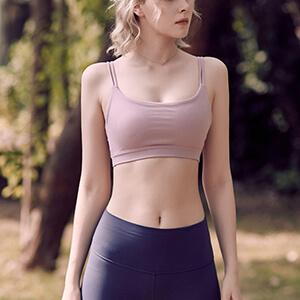 A low support sports bra is also called simple fixed sports bra. This type of bra is simple and has a flexible mesh inside, with no supporting design for the human body. It can be bought easily in TNF, MHW, Nike, Adidas. 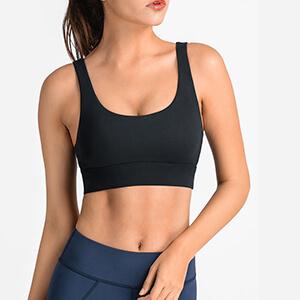 A medium support bra is also called a compression sports bra, which is the most common sports bra. This type of bra forms pressure with the help of fabric elasticity so that it supports breasts well. 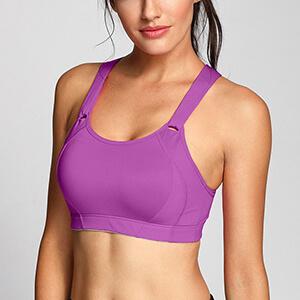 A high support sports bra is also called combined bra. This type of bra has a unique wire for better support, and higher fabric intensity. A high sports bra can provide good protection and support for D and D+ cup.

Great for
B cup: Extreme high-intensity exercises
C cup+: High-intensity exercises Girls with A or B cup are blessed since most sports bra can provide enough protection for your breasts, while girls with C cup need sports bras with better support. The three support levels mentioned above are not definite since the support level is also related to the bra cup. For 34A, a low support level bra can support breasts well during medium intensity sports; for 36D, it can only support breasts well during low-intensity sports. You will need to buy a suitable sports bra according to your size and different types of sports.

◎ Breasts don’t shake during sports. Sides and upper of the boobs should be covered and supported well.

◎ Straps can’t be too thin because thin straps make you feel binding and pain after a long period of wearing. ◎ The fabric should be moisture-wicking and breathable. A lower band should be wider to provide better support.

◎ Bra straps should be stable, and edges shouldn’t be raw.

◎ Wide straps are recommended since they can reduce shoulder pressure. Straps should be adjustable. Underwired sports bras are more suitable for large breasts because they provide better support. The underwire can be metal or other hard material. Trying on bras is essential. If boobs are asymmetrical, you may choose a bra that fit the larger boob.

It is better to prepare two types of sports bra in two levels of support.

A/B cup women can buy one low support and one medium support sports bra. It is better to wash a sports bra by hands.

Line dry. Do not twist dry. No matter if your breasts are small or large, they need to well-protected.

In order to provide you a personalized shopping experience, our site uses cookies. By continuing to use this site, you are agreeing to our cookie policy.
ACCEPT